What was the tactical benefit of using flamethrowers as weapons?

I often hear stories of flamethrower troops storming the beaches of Iwo Jima and burning bunkers full of troops.

But isn't it more risky to carry a tank of flammable liquid with limited fuel and range when chucking a few grenades into a bunker could suffice? Wouldn't you just become a bigger target for the enemy?

Flamethrowers can be useful for the assault on field fortifications:

Flamethrowers are less effective as a general-purpose infantry weapon:

Basic flame weapons are effective against flammable targets or in very close quarters. Normally they are not used in any situation where the defenders would have a clear view of the attackers. Flame weapons are currently popular among insurgent fighters due to their simple operation and effectiveness in ambush situations.

In World War II, flame throwers were used to clear out no-surrender fortified positions which were primarily found in the Pacific theater of war. Normally when a line or position is overrun the defenders will retreat or surrender. This was not the case for Japanese forces which would often hole up in pillboxes or bunkers and fight to the end. Against such positions a flame thrower is effective if the attacker can approach it from the side or the rear and incinerate it. When the defensive line is intact this is not usually possible, so flame throwers were primarily used in "mop up" operations to destroy fortifications that had already been strategically nullified.

In modern warfare, flame throwers are considered to be largely superseded by thermobaric weapons or incendiary rockets which are more powerful and work at longer ranges. Thermobaric weapons are useful in urban or other close quarters in which it is either (1) difficult to target projectile weapons, or (2) the situation is so close, that the use of projectile weapons could harm friendly forces accidentally. 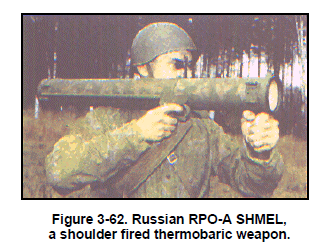 The US equivalent is the Flash rocket launcher. American forces rarely use the Flash due to the high probability of civilian casualties if the weapon is used in an urban environment. Modern military soldiers also have access to incendiary grenades which can be used to ignite flammable materials. These weapons can be effective against pillboxes or other positions which have a limited field of view. Normally such positions are no longer tactically relevant because modern artillery and rockets are so accurate and powerful that pillboxes can be destroyed from a long range.

I am fairly fearless facing most weapons, but flamethrowers are a major exception. In truth, I almost never thought about risk in combat, being under the influence of adrenaline and trained to think tactically. But you cannot evade an in range flamethrower if the operator aims it at you. Modern tactical combat is maneuver warfare, although I once used a fixed defensive positions (with the advantage of a major water barrier and only one causeway to defend). That enemy was mainly 13 year old boys who were pressed into service (their whole family would die if they refused) and no significant heavy weapons (RPG's excepted). Aimed fire was so effective I directed shooting at "anyone giving orders" and, indeed, never fired a shot myself (which was consistent with what Marines taught in Landing Party School - the leader should be observing, thinking and giving orders unless things go badly wrong).

Everyone has covered all the pertinent points, except one: fear. Not only can a single flamethrower clear out a bunker effectively, the lone flamethrower cause the abandonment of nearby bunkers as well.

One thing that has not been mentioned about the flamethrower in its bunker-clearing ability is that, in close quarters, i.e. a bunker, the liquid fuel has the tendency to turn into an aerosol. When it does this, the fireball expands DRASTICALLY. You may have seen WWII/Korean War/Vietnam War footage of bunkers that will be hit with a flamethrower, and they will virtually explode in every direction, this is the reason.

When you combine this effect with the primal fear of burning alive, you get a devastating psychological weapon. Humans evolved alongside fire for millions of years. It's deeply engrained in our psyche. We have all been burned and know that pain VERY well. Most of us can imagine, to a degree, what it would feel like to burn alive, and unpleasant doesn't begin to describe it. Conversely, bullets and explosions are new. We didn't evolve alongside these threats, so they are not as deeply engrained. Most of us can't even begin to imagine a gunshot wound feel like.

I'm sure if you asked combat soldiers and veterans what's scarier, dying or being wounded by being shot, or dying or being wounded by a flamethrower, a large percent of them would say the flamethrower is scarier, in a different kind of way. And this bears in several videos I have seen over the years of bunkers being cleared by flamethrowers. I can't be sure (terrible memory), but I think a lot, maybe most of the videos I have seen, are the flamethrowing tanks. They will withstand the machine gun from the bunker, and get close, then everyone scatters, they don't even bother trying to defend. So, the single tank will quickly clear out several bunkers out of fear.

It's benefits greatly outweigh the risks, however, it has been judged inhumane, rightly so, I believe. Having it makes you a vulnerable target, but it terrifies the enemy and can cause surrender before confrontation begins. While, I am sure you can find footage of this in almost any WWII documentary on the Pacific Theater, as well as Vietnam, I also remember a book I read when I was a kid by a Marine, I forget which war, and he said something about the psychological effect of the weapon, if I can find which book, I'll link it here.

If it's bunker warfare at close range (the only range at which flamethrowers work), you're crawling along or under cover anyway, so it's not like you're that bigger of a target. Throwing a 1-lb / 500g grenade through an aperture sometimes not much bigger than that would be hard from close range even if you weren't pinned down by the bunker's machine gun, adrenalized, and terrified you were shortly going to die horribly. Flamethrowers were used in conjunction with other weapons - probably rifles & BARs trying to suppress the MG to give the flamethrower guy a chance to stand up and use it. Yes, it's dangerous, but that's what close combat was.

Not the answer you're looking for? Browse other questions tagged world-war-two military weapons tactics or ask your own question.

7
What was the first recorded use of Aerial Weapons in warfare?
25
What was the first battle in history fought by vast-majority-% "distance-shooting" non-mechanized force?
10
What was the civil weapons legislation under Hitler?
15
In Viking combat, how much damage was done using the shield?
8
Was there Western tactical air support during the Battle for Berlin?
25
What tactical situations made the use of traditional horse cavalry effective in World War II?
17
Was the act of servicemen exchanging their weapons for enemy weapons common during WWII?
6
When did Mesoamericans stop using their native weapons?
3
Were any tactical missiles used during the 1971 Indo Pakistan war?
0
Which kingdoms were using WWI weapons at the time of the second world war?