What is Lorenzo de' Medici holding in this painting?

Recently someone I know visited the Palazzo Pitti in Florence, Italy. I'm told this painting of Lorenzo de' Medici by Girolamo Macchietti hangs there. We've been unable to figure out what he's holding in his right hand - what is it? 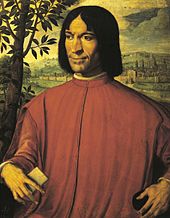 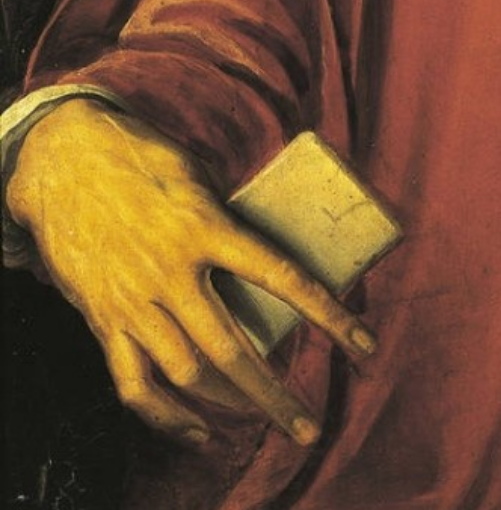 It is a rather featureless rectangle. As such it is open to some interpretation.

If you ask art historians, then they might say this 'thing' in "Ritratto di Lorenzo il Magnifico - Portrait of Lorenzo the Magnificent", painted by Macchietti ca 1585 posthumously represents a letter:

Perhaps the most revealing portrait of Lorenzo is the depiction by Girolamo Macchietti's Portrait of Lorenzo de'Medici of 1540–50 […] a collaborator and follower of Giorgio Vasari. Here, Lorenzo is portrayed in front of landscape, seated in a veranda. Next to him is a tree filled with laurel braches, an attribute for his name, Lorenzo. […] Lorenzo's red Florentine attire is an investiture of a man of letters. He holds a letter or a document in his right hand, also a testimony to his diplomatic and political role.
— Liana De Girolami Cheney (Professor of Art History, Chairperson Department of Cultural Studies, University of Massachusetts Lowel): "Giorgio Vasari's Portrait of Lorenzo The Magnificent: A Ciceronian Symbol of Virtue and a Machiavellian Princely Conceit", Potere delle immagini / Immagini del potere, Iconocrazia, 2012. (Online)

That may be true.

But it certainly doesn't look like a letter. It has no indication of writing, is too bulky, too thick, has too rounded corners and a strange colour.

Admittedly, the colour argument alone is a weak one, as colour reproduction of a half-millenia old picture is troublesome enough, and amplified once more if web/phtohraphy is added to that. Just compare this version of the picture:

For comparison, pictures of Lorenzo where writings and letters are visible:

Also for comparison, the artist Macchietti delivering a portrait with a letter and natural hand anatomy: 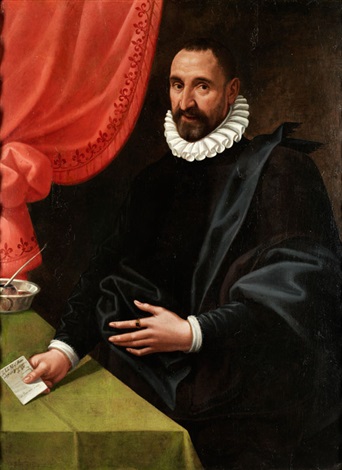 This is further complicated as almost identical versions of this picture got copied by artists like Luigi Fiammingo or later by unidentified artists at the Scuola fiorentina. Unfortunately, the Italian Culturual History website only has this anonymous version catalogued, but not the Macchietti version of "Ritratto di Lorenzo de' Medici detto il Magnifico".

If you ask me, and I go solely by the look and the hints and allegories present in this picture, then I'd say that this looks much more like a metal object, perhaps an ingot.

Why an ingot? Because the Medici weren't all about the commonly cut short narrative of going from doctors, textile merchants, bankers, to conniving popes and rulers:

Bankers were an obvious choice to fill the position of depository, since they had the wherewithal to advance loans to the treasurer when deposits did not cover expenses. In return for this “working capital line of credit,” the banker would secure the loans with papal customs, the salt monopoly, and other tax revenues in Rome and the Papal States. The Medici would establish a decades long relationship with the Holy See as the primary bankers to a succession of Popes.
— Harry Don Stephenson, Jr.: "'Unlucky in affairs of business…' Turning Points in the life of Lorenzo de Medici", MA Thesis, Duke University, 2015. (PDF)

Lorenzo had several estates around Vico Pisano, Buti, Calci, and Fucecchio, and he owned an iron mine, as well as substantial houses, in the area.
— F. W. Kent: "Lorenzo de’ Medici and the Art of Magnificence", The Johns Hopkins University Press: Baltimore, London, 2004.

After the agreement of 1466, the Medicis have been maneuvering to consolidate their dominance of international traffic. In the first months of 1470 they entered into a cartel to control quantities, prices and distribution of the proceeds from the deposits. It is an attempt of monopoly, constituted in agreement with the pope, who owns the mines of Tolfa, and with the king of Naples, owner of those of Ischia. […]
— Giulio Busi: "Lorenzo De’ Medici. Una vita da Magnifico", Mondadori: Milano, 2016. (My translation from Italian, please improve)

Another foray into mining was Lorenzo the Magnificent’s repeated attempts to gain control of the iron ore monopoly of Elba. He finally succeeded in 1489 by gaining a controlling interest in the company that mined the ore and sold it to ironmasters, who paid in cast iron or iron products as well as cash. The venture was reasonably profitable, but it did not make a lasting contribution as it began just a few years before the company’s bankruptcy in 1494.
— Edwin S. Hunt & James M. Murray: "A History of Business in Medieval Europe, 1200–1550", A History of Business in Medieval Europe, 1200–1550, Cambridge University Press: Cambridge, New York, 1999, p196.

Elba being the only major source of iron ore for Italy.

And my guess is that his 'diplomatic' or political record was much better than his own business dealings. Further, the very crampy features of this hand holding or grabbing the 'thing' is not the result of the artist's inaptness, but a wanted feature. Thus I would posit that this symbolises the Medici's continued attempts to gain monopolies in the metal or other raw materials trades.

This then completes the deal for Lorenzo:

What Lorenzo had signed down in Rome in 1466 was a contract giving the Medici the total monopoly over all sales of alum throughout Christendom. There is no indication from his writings that Lorenzo had grasped the importance of this.[…]

Despite this exemplary strictness, in 1466 Pope Paul II declared that the Church, in alliance with the Medici bank, would now operate a monopoly on the sale of alum throughout Europe. After salt and iron, alum was the most important mineral of the time. Without it, the cloth trade could hardly have functioned.
— Tim Parks: "Medici Money. Banking, Metaphysics, and Art in Fifteenth-Century Florence", Profile Books: London, 2005.

It is a letter.

It was a common practice at the time to depict men of business holding a letter or ledger in their portraits.

It's definitely a locked letter.

It does look like a letter if you know anything about how they were sent. https://www.youtube.com/channel/UCNPZ-f_IWDLz2S1hO027hRQ

I think that was a notebook! He was a banker, so probably he needed some notes, to write down, how many people owe to his bank!

Not the answer you're looking for? Browse other questions tagged art identification or ask your own question.

4
Epoch of an item marked with anchor symbol with the letters N and D
16
Please help find these paintings
7
Who is the model in this Edward Burne-Jones painting?
1
Who's the artist behind this popular painting?
8
What is Washington holding in the painting "Scene at the Signing of the Constitution of the United States"?
8
Help on finding out about a sword
8
What regiment is this (~1826-1861) French cuirass cavalry uniform?
9
What is the painting within this 17th c. painting?
6
Help identify origin of a small clay statue