How did recognition by Morocco influence the history of the USA?

In my personal experience when having studied the early history of the American Republic, I learned about The Treaty of Marrakech in my U.S. Diplomatic History Graduate course. Prior to that time, there was hardly any mentions of The Treaty of Marrakech and Morocco's role for having been the first county to diplomatically recognize the United States.

And it wasn't until a few years ago that I learned about The U.S Embassy in Tangier which was built in the early 1800's and how this particular Embassy, was one of the earliest Ambassadorial missions in U.S. History-(Today it is called, "The American Legation Museum" and it is the oldest U.S. National Landmark which exists outside the continental United States). In addition to its early history, this particular U.S. Embassy was also of important strategic value during the Second World War.

How did that treaty, and recognition by Morocco, influence early U.S. history?

It is indeed unfortunate that the influence of Morocco (and nearby countries of the Maghreb) on the early history of the United States was overlooked, because it was overshadowed by even larger events.

As the questioner points out, the Treaty of Marrakesh opened the ports of Morocco to the 13 colonies, and was a form of diplomatic recognition, basically the first. This was soon overshadowed, however, by the alliance with France, which tipped the war in the Americans' favor.

Because of the earlier interaction, Morocco later refrained from the actions of the other Barbary Pirates of modern Algeria, Tunisia, and Libya that harassed American shipping in Atlantic and Mediterranean waters. The pirates of North Africa led to the creation of the American Navy and Marine Corps in the early 1800s. (The Marine Corps hymn begins, "From the Halls of Montezuma, to the shores of Tripoli.) Again, these important events were soon overshadowed by the War of 1812.

Relations with Morocco (and the rest of Northwest Africa) were clearly significant in early U.S. history. It appears that they don't get much coverage because they were eclipsed by even more critical events. 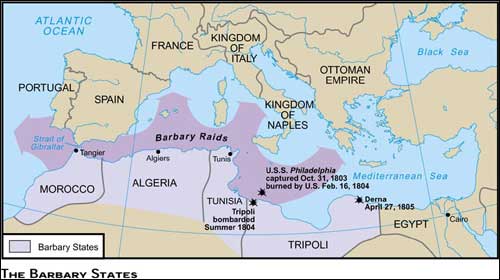 Morocco was a Barbary Pirate state. Morocco did prey on US shipping during the revolution, and the Treaty of Marrakech was the direct result of extortion by Morocco on the United States for tribute.

The US Peace delegation to Paris in 1784 Jefferson, Adams, Franklin were sent to negotiate commerce with the principal states of Europe and the Mediterranean — including the Barbary states. Already in Europe, the commissioners quickly learned that the Europeans made peace with the Barbary powers through treaties that involved annual payments of tribute ... Congress did decide that peace was to be bought. They authorized $80,000 for negotiations. The Commissioners sent American consul Thomas Barclay to Morocco and Connecticut sea captain John Lamb to Algiers. In Morocco the draft treaty Barclay carried with him was accepted with only minor changes. Jefferson, Adams and Congress were very satisfied; the Morocco treaty made American vessels safe from Moroccan corsairs

"The Betsy" seized by Morocco in 1784 was the first United States ship seized at sea. The Betsey was a merchant brig and was seized off the coast of Spain. Great Britain recognized the independence of the U.S. by the Treaty of Paris signed in September 1783. U.S. ships ceased to be covered by the tribute Britain was paying to the Barbary pirates at that time. Having a treaty with one pirate nation did not mean you were safe from the other pirate nations. Morocco was in negotiation with the US at the time Jefferson was in Paris to get the United States to pay her tribute, like all of the European nations paid the Barbary pirates tribute. The US declined and that's why they took the Betsy. To coerce the United States into a tribute plan.

The news of the ship's(Betsy) capture by Moroccan pirates reached the U.S. in 1785: The situation was satisfactorily resolved with the friendly intervention of Spain's foreign minister, conde de Floridablanca. Besides spreading goodwill, the minister was eager to resolve the Mississippi question in North America and hoped that his intercession would help to maintain cordial relations with the United States—a potentially valuable regional ally against the British. On July 9, 1785, the emperor of Morocco liberally agreed to release the Betsey, including her crew and her cargo, in exchange for America's pledge to send a peace negotiator very soon to conclude a formal treaty. During the intervening months, the cargo and ship were lost, but Moroccan affability prevailed and restitution was made. (London, Victory in Tripoli, pp. 27-28).

No coincidence Algeria declared war on the United States the very same year. Which we solved with Annual tributes.. (for a while)

in 1795 when America finally did make peace with Algiers, agreeing to pay annual tribute. The following year, once the US met its initial treaty commitments, the Americans held in Algiers were freed, including the few survivors from the Maria and the Dauphin. Treaties were also concluded with Tripoli, in 1796, and Tunis in 1797. Soon after, American consuls were appointed in each Barbary state

The United States would fight two wars with the Barbary Pirates.

What was the long term ramifications of the United States tussle with the Barbary Pirates? Thomas Jefferson and the Democratic Republicans recognized the worth of a standing professional navy. Lots of tribute paid in the mean while.

A great origin story of how we went from paying tribute to armed struggle. It wasn't a foreign policy derived in Washington but involving one of the really heroic block heads of American History... William Eaton.

Eaton had run away from home at 16 to join the colonial army. He had risen to officer under Washington. Had made and lost a fortune. He had been a spy master for President Adams who had helped thwart a Spanish invasion of Georgia. Now Adams would send William Eaton a "Man of Action" on a diplomatic mission to Tunisia, to the Barbary Pirates where he would get in all sorts of trouble.

Eaton would then be called to Tripoli to help another Adams appointee and thats where all the wheels would come off.

Eaton found the Barbary Pirates detestable, and he was an ideologue caught up in American fervor. He basically starts the first Barbary war. Get's recalled by Jefferson, and then returns largely on his own dime and invades Tripoli with like a half dozen marines, and almost wins. (Yes that's where the lyrics to the American Marine Hyme come from.. shores of tripoli"... Anyway the story is a great one.. I can't find all the sources right now, and it's out of scope. Maybe a future question.

William Eaton'sdescription of Bey Yusef of Tripoli at their first meeting:

“He was a large, vulgar beast, with filthy fingernails and a robe so spotted with spilt food and coffee that it was difficult to distinguish the orginal color of the garment…. [H]e rarely bathed, if ever, and the stench of his body, which mingled with the powerful scent he used to disguise the odors, made me want to retch…. He was an evil man, but evil in a petty, mean way. There was no grandeur in his bearing, his manner or his speech. There are tyrants who clothe themselves with regality, but Yusef Karamanli was not of their number. In Philadelphia he would have been a worker at the docks unable to find employment; in New York, he would have been a cutpurse hanged at the gallows; but such are the ways of Barbary that in Tripoli he was the master of the world.”

8
Did Germany have treaties imposed upon it after WWII that mirrored the weight of the Treaty of Versailles?
23
Why was the bald eagle chosen as the national bird of the United States?
12
Why didn't the Ottomans conquer (what is now known as) Morocco?
2
Was there a time when George Washington discovered some of his soldiers absolutely refused to swear loyalty and obedience to the Continental Congress?
6
Line houses and laws?
4
Has Morocco ever claimed ownership of the Canary and Madeira islands?
30
Were secret treaties ratified? How did they become official while remaining secret?
10
Why didn’t the U.S. annex the entire Spanish East Indies at the end of the Spanish-American War?