Was Col. John K. Waters (Gen. Patton's son-in-law) wounded in the buttocks or the stomach during Patton's raid on Oflag XIII-B near Hammelburg?

Summary:
In late March 1945, claiming he was worried about the Germans executing American POWs (ostensibly in the wake of the Malmedy massacre), General George S. Patton ordered a raid on Hammelburg's Oflag XIII-B POW camp to liberate the American officers imprisoned there. However, his real intent (based in part on letters to his family) was likely to rescue his son-in-law, Col. John K. Waters, who was a POW there. The assignment was given to Lt. Col. Creighton Abrams (whom the American M1 Abrams tank is now named after) of Combat Command B in the 4th Armored Division. Abrams wanted to proceed with a batallion or regimental sized force but Patton granted only a much smaller force for the rescue mission. Abrams could not go himself due to illness, so Capt. Abraham Baum was given the assignment and about a company of medium and light tanks and 300 infantry to penetrate deep behind enemy lines, liberate the camp, and return the POWs to safety.

Task Force Baum encountered heavy fighting on the way and suffered many casualties and lost several tanks and vehicles, but made it to the POW camp. During the confusion of the battle at the camp, Col. John K. Waters (Patton's son-in-law) was seriously wounded when shot by a German guard, and could not be evacuated with the rest of the POWs when the camp was finally liberated. The nature of the wound gives rise to my question below. (The initial liberation of the camp is not the end of the story, there was worse to come for Task Force Baum and the POWs, but to get to my question…)

Question:
Was Col. Waters wounded in the buttocks, or in the stomach? The first two sources above indicate the buttocks. The second two sources indicate the stomach. I cannot find a source that indicates multiple wounds (or a single hit with separate entry and exit wounds) so I don't think it is a case of both being true (though I grant that it is a possibility). Is there a superior information source which could clear up this discrepancy? I know it's only a minor detail in the larger picture of this incident, but I would like to know which account (if any) is accurate regarding the nature of Col. Waters' wound(s) in the raid.

Spoiler (for the curious):
Most of the POWs and Baum's task force were recaptured within a day following the raid, and taken back to Oflag XIII-B. Patton, who had not received permission from his superiors in Army Group 12 for the raid, was in trouble and faced Eisenhower's wrath. Patton deftly softened the blow of the tactically botched raid by pointing to the strategic success it offered through diverting large German forces away from the main body of Third Army, thus allowing an easier progression toward their more strategically important objectives. Ike was evidently mollified enough to not officially reprimand Patton for the incident. 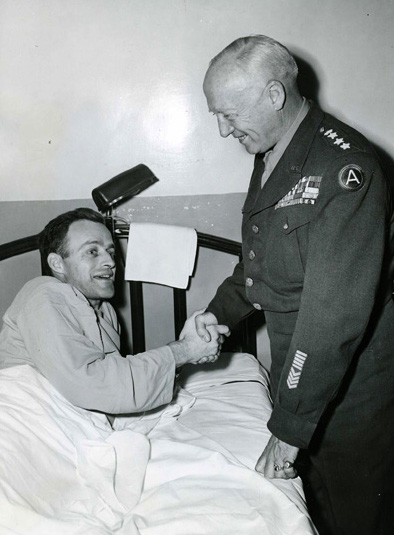 In The Patton Papers: 1940-1945, Martin Blumenson cites the journal of Hobart R. Gay's journal entry for April 7th. Colonel (later General) Gay was Patton's Chief of Staff. The description is quite detailed and perhaps explains the conflicting accounts:

Col. Odom returned with two cub planes, bringing Waters, shot through leg, bullett coming up through his buttocks and injuring his spine. Condition good, will live and probably not be paralyzed.

in the left groin but below the peritoneal cavity. The bullet went through the rectum, knocked the end off his coccyx, and came out his left hip...

The coccyx "is the final segment of the vertebral column".

12
What is the current location of the "Cauldron of Trun and Chambios" from August 1944?
19
Why was Eisenhower chosen to be Supreme Allied Commander in Europe?
12
Who advised FDR on foreign policy before and during WWII?
12
Which Allied aircraft scored the most air-to-air kills against the Me 262 in WWII?
11
What transit restrictions were in place in Occupied Germany limiting military and civilian movement between the four occupation zones?
8
Where can I find documents from the Nuremberg trials about war crimes of the Wehrmacht in the Soviet Union?
0
Was the town Jadovno near Gospić named after the concentration camp during World War 2, or was it the other way around?