Who are these red flag worshipers from these early maps?

While doing some research into maps over the last month or so, I came across an interesting item which I found recurring on two different sources. I first encountered this scene on a copy of the Abraham Ortelius Atlas, the 1570 Theatrum orbis terrarum. From page showing the map labeled Russia at the Library of Congress site: 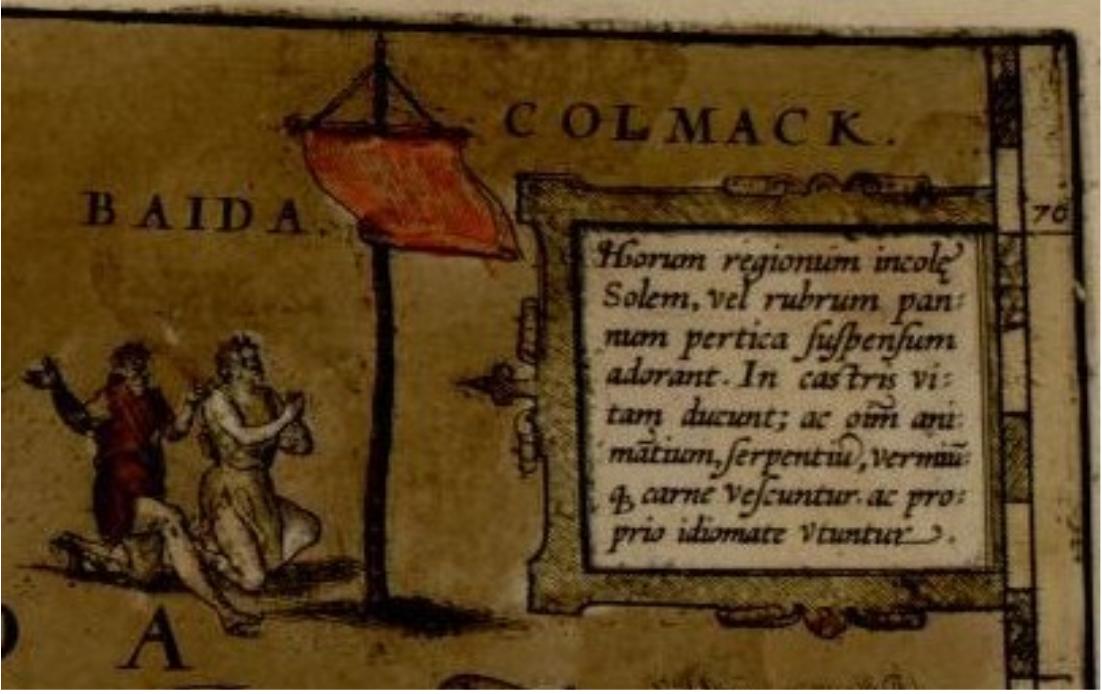 It looked like a curious scene, and I thought to look into it later. When looking at an different map, the earlier Carta Marina of 1539 by Olaus Magnus, I was surprised to find a very similar scene, this from Bell Library: 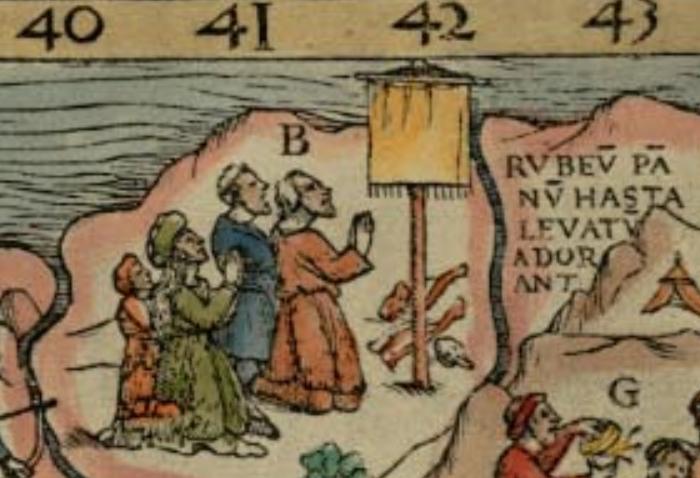 Interestingly enough, the later Ortelius map seemed to have more information in its legend than the earlier. As Latin was not part of my education, I attempted to feed the information on the legends into Google translate, but the machine translation was confusing, and did not really clear things up for me.

Further research found another image yet, at the same UofM Bell Library site, also from a Olaus Magnus publication, The Historia pg 98, showing another slightly different version of the same scene: 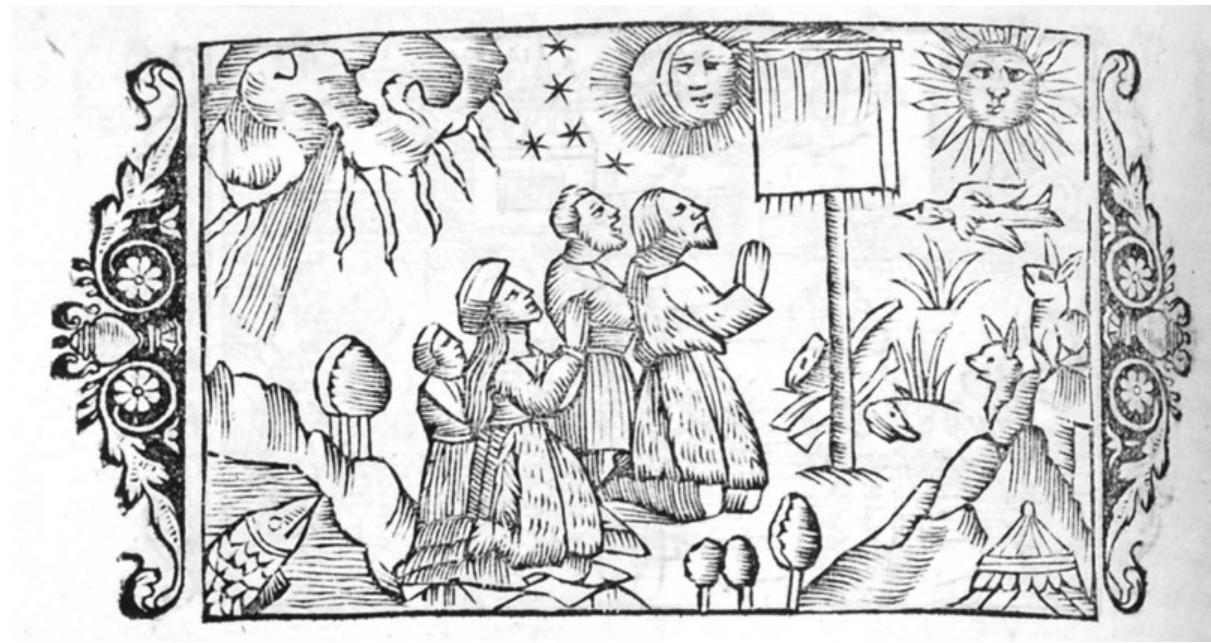 So, what is this scene representing? I understand we can't take everything we find on these maps as fact (I do enjoy the sea monsters, unicorns and dragons however), but the placement of this scene on two different maps, both in northern regions, makes me wonder if it isn't a representation of some cultural behavior specific to a group, or perhaps a historical event.

What is the story here?

Just wanted to add a link for some more information about the cartographer Olaus Magnus in the History of Cartography, Vol 3, chptr 60 • Scandinavian Renaissance Cartography which has a discussion of Magnus and his Carta Marina and Historia. A section there addresses a concern I had about whether or not his maps vignettes also might have been copied from an earlier source (emphasis mine):

A complementary text, Historia de gentibvs septentrionalibvs, published in Rome in 1555, contains a small modified version of the map. As with the Carta marina, the Historia offers a splendid mixture of fact and fancy— a veritable hyperborean apotheosis. The large number of vignettes are in the same style as those that decorate the original map. They are the work of Olaus Magnus himself: he was no mean artist. Indeed, the Swedish historian Hjalmar Grape juxtaposes some of his woodcuts with those of Hans Holbein, whose style possibly influenced Olaus Magnus. The illustrations belong to the bold, vigorous, and occasionally naive artistry of the north. The pictorial content seems to have been designed to show the Catholic world of the south what had been lost through the Reformation in the north. At the same time, Olaus Magnus remained a Nordic patriot who was anxious to replace the concept of a barbaric north with a more civilized image.

See Historia de gentibus septentrionalibus / auctore Olao Magno ... Magnus, Olaus, 1490-1558 (click here for full Hathi Trust catalog entry for the 1562 edition) or here for Wikipedia's description. Your explanation is in Book 3, Chap 2, folio 30 verso, near the bottom of the page of the 1562 edition, and on page 98 of the nicer-looking fuller 1555 edition.

The title of the chapter is "De Suppolarium hominum superstitiosa cultura", "On the superstitious cults of the arctic people". The gist is, it's cold up there, and dark, they worship the sun and moon, and the color red reminds them of the color of the blood of animals. A better latinist with better eyesight than mine will be able to transcribe and translate it properly.

There is an early modern English translation, cited by the Minnesota library site:

Olaus, Magnus, Archbishop of Uppsala, 1490-1557. A Compendious History of the Goths, Swedes, & Vandals, and Other Northern Nations. John Streater active 1650-1670 London : printed by J. Streater, and are to be sold by Humphrey Mosely, George Sawbridge, Henry Twiford, Tho. Dring, John Place, and Henry Haringman 1658

and a recent one

A Google search for "Compendious history of the goths" found a pdf of the 1658 translation; relevant snippets (from p.37) read

... they adore the Sun that shines to them all the Summer, giving thanks unto him, because he brings them light instead of darkness they endured, and heat against extream cold ... so likewise they adore the Moon because in winter, when the Sun is absent, they alwaies enjoy the light of the Moon: but when that fails by reason of the conjunction, they dispatch their businesse in the day, by help of most clear Starrs, which shine the brighter by reason of the white Snow. Moreover those people that live under the Pole are deluded by a more stupid errour by the Devills. For they hang a red Cloth upon a Pole or Speare, and with attentive prayers and customs of worship, they adore it, thinking that there is some vertue in it, by reason of the red colour which is like to a beasts blood. And also because they suppose that by looking upon it, they shall be more fortunate in killing beasts, drinking their blood, as I shall shew underneath, concerning the manners of the Laplanders.

It's not totally clear to me who "they" are. The previous chapter mentions Norwegians and Värmlanders and Lithuania and Muscovy; this chapter mentions (as above) Laplanders. In general Olaus describes the inhabitants of current Nordic countries and lands near the Baltic, stretching east as far as the Kola peninsula and the White Sea. My guess is, Laplanders. (This is consistent with the placement of the vignette on the 1539 Carta Marina, at the northern extreme of the Scandinavia.)

And this guy states that these vignettes come from Marco Polo (a good guess when seeing cute figures on late medieval maps...). He also gives full translations of all of them.

Here is the complete quote:

Can somebody find this quote from Marco Polo? I do not remember anything of sorts when reading a short version of his Travels and could not find it searching for 'red'.

Not the answer you're looking for? Browse other questions tagged cultural-history art 16th-century cartography or ask your own question.

4
Who was the first Renaissance cartographer to include rich content in their maps that went beyond spatial points, borders, and location names?

9
Can you identify these images from Revolution-era Russia?
26
What are good online sources for historical maps?
11
Who is the man in the red jacket in this painting?
9
Who are the 20th century painters on this t-shirt?
4
Who was the first Renaissance cartographer to include rich content in their maps that went beyond spatial points, borders, and location names?
8
How were maps drawn and printed in the late 19th-early 20th centuries?
10
What are the red and white sectors of The Tower of Babel (Rotterdam)?
9
Is this costume plate from Theatrum Orbis Terrarum correctly colored?
9
Do maps dating back to 1489/90 show Ascension and St Helena even though these islands were supposedly only discovered in 1501 and 1502 respectively?
16
What size are these mosaics of Justinian and Theodora?