Are there churches that belong to the German Armed Forces?

Yesterday, while walking through Graz, in southern Austria, I noticed an old church. I noticed it because it had a big symbol painted over its entrance door. You might have seen this symbol in WWI and WWII media; I took a photo: 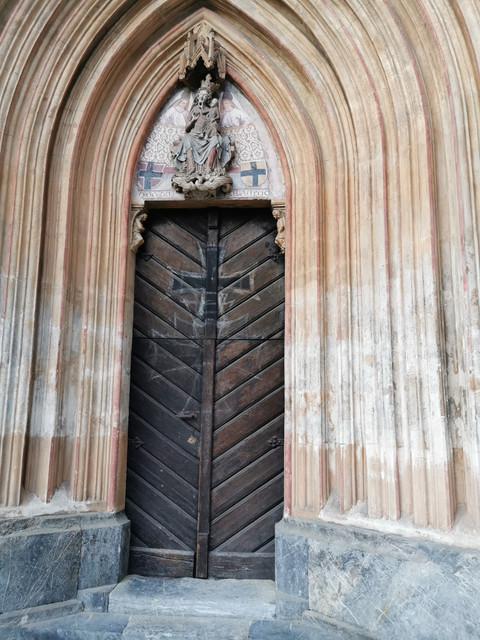 Why does this church have the logo of the German Military? Does it own churches in Austria and Germany?

In my opinion, it is probable that you saw the Leechkirche on Rittergasse with a Teutonic Knights cross painted on the doors, instead of a garrison church of a hypothetical German army garrison in Graz during Nazi rule.

The Black Cross (Schwarzes Kreuz) is the emblem used by the Prussian Army, and by the army of Germany from 1871 to present. It was designed on the occasion of the German Campaign of 1813, when Friedrich Wilhelm III of Prussia commissioned the Iron Cross as the first military decoration open to all ranks, including enlisted men. From this time, the Black Cross was featured on the Prussian war flag alongside the Black Eagle. It was designed by neoclassical architect Karl Friedrich Schinkel, based on a sketch by Friedrich Wilhelm III1 The design is ultimately derivative of the black cross used by the Teutonic Order. This heraldic cross took various forms throughout the order's history, including a simple Latin cross, a cross potent, cross fleury and occasionally also a cross pattée...

...The Black Cross was used on the naval and combat flags of the German Empire. The Black Cross was used as the symbol of the German Army until 1915, when it was replaced by a simpler Balkenkreuz. The Reichswehr of the Weimar Republic (1921–35), the Wehrmacht of Nazi Germany (1935–46) and the Bundeswehr (1 October 1956 to present) also inherited use of the emblem in various forms. The traditional design in black is used on armored vehicles and aircraft, while after German reunification, a new design in blue and silver was introduced for use in other contexts.

So the Black cross design used by the German armed forces in various designs since 1871 is based on the symbol of the Teutonic Order.

The coat of arms of the Teutonic Knights was a black cross in various forms.

The Teutonic Knights ruled Prussia, Latvia, and Estonia for centuries. I am not certain whether those land were part of the Holy Roman Empire. But the Teutonic Knights did rule lands inside the Holy Roman Empire until 1806, and it was dissolved by Napoleon in 1819, but was reconstituted as a purely religious order with no secular authority in 1810.

The Order did keep its considerable holdings in Catholic areas of Germany until 1809, when Napoleon Bonaparte ordered its dissolution and the Order lost its last secular holdings.

However, the Order continued to exist as a charitable and ceremonial body. It was outlawed by Adolf Hitler in 1938,[9] but re-established in 1945.[10] Today it operates primarily with charitable aims in Central Europe.

The Knights wore white surcoats with a black cross. A cross pattée was sometimes used as their coat of arms; this image was later used for military decoration and insignia by the Kingdom of Prussia and Germany as the Iron Cross and Pour le Mérite.

So the cross on the door is a cross pattee, like the German Iron cross symbol and like some forms of the coat of arms of the Teutonic knights.

You will note that above the Church door is a stature, with two painted coats of arms beside it. One of them is white with a black cross, and so could be a coat of arms of the Teutonic Knights.

The description of Graz in The Rough Guide to Austria, page 281, describes the University District immediately east of the Stadtpark. It mentions the Leechkirche east of the park on Rittergasse, "a delicate Gothic church with a delightful thirteenth-century relief of the Madonna and Child above the main portal. before becoming the parish church for Graz University, the Leechkirche belonged to the Teutonic Order of Knights,..."

Here is a link to a photo of the statue and paintings over the door of the Leechkirche, which looks very similar to your photo.

Therefore, I think it is probable that you saw the Leechkirche with a Teutonic Knights cross painted on the doors, instead of a garrison church of a hypothetical German army garrison in Graz during Nazi rule.

Not the answer you're looking for? Browse other questions tagged germany catholic-church austria heraldry symbols or ask your own question.

15
Are there any historians who believe that the crusades were not motivated as a distraction from internal conflicts?
61
Why are the German and French languages so different?
10
Considering what was known about Hitler in 1933, why would German bishops declare that Catholics could cooperate with the new State?
10
Are there equivalents of the Domesday Book for other (French or German) duchies?
2
Which factors led to the different casualty ratio betwen British and German forces during the Battle of Normandy?
5
Under German-Nordic heraldic tradition, can arms pass through the female line?