What's this flag flying on a fort at Kodiak, Alaska?

Naval captain Yuri Lisianskii drew a harbor scene in Alaska about 1805. It was engraved in England for an edition of his book. 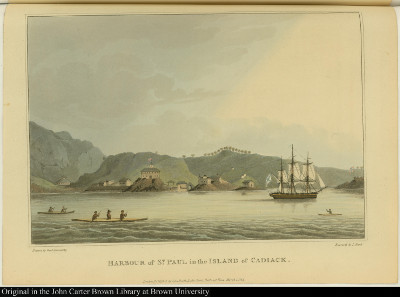 In the image, from left to right, there are flags flying on a building, a ship, and a fort. The flag on the building is the simple tricolor of Peter the Great that Russia uses today. The flag on the ship is the ensign of the Imperial Navy. However, after comparing to other Russian flags and the flag of the Russian-American Company, I can't identify the third one. 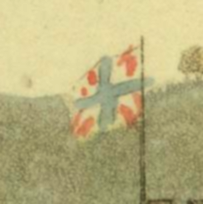 What is the strange third flag? I would say nothing we can identify, its an error by the engraver and doesn't represent what was seen (or drawn) by Lysianskyi. Let me explain.

Once again comments touch on the truth of the matter, one comment pointing out the incorrect colors on another flag in the image:

Hmmmm - isn’t Peter the Great’s flag White ?top stripe, Blue center stripe, Red bottom stripe? Thus picture has the red and blue inverted.... regardless, no idea on the one in question. – Kerry L Dec 6 '18 at 22:14

We can take a look at that other flag: 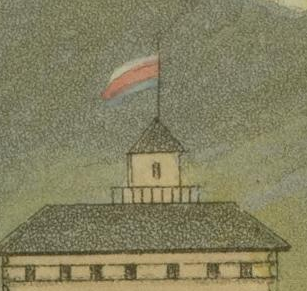 If we compare that to known information concerning the Russian American Company flags, we find that this flag should be the commercial flag of Russia.

White over blue, over red. But this not what is depicted in this illustration.

@Pieter Geerkens in comments point out

rigging on the ships is exquisitely detailed

, so we should accept the rest as equally correct, but there's a problem with that, and we aren't the first to notice this discrepancy. The point being that what we are seeing represents the work of two different individuals.

Our problem is discussed in an article by Dr. Svetlana G. Federova, originally published by the Academy of Sciences, U.S.S.R., a translation of which appeared in the Pacific Historian, vol 14, No. 1, winter 1978, discussing The Flag of the Russo-American Company. This is available on a PDF at fortross.org. Here is a clipping from that article discussing the apparent discrepancies over what was observed vs what was drawn (sorry I had to resort to an image, the font used does not ocr well): 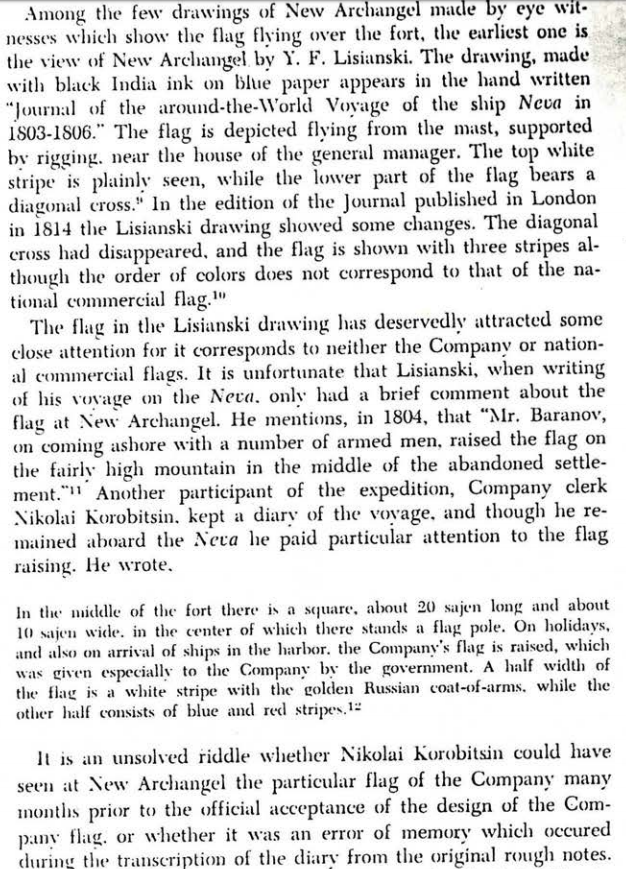 From this we can gather a couple of points:

The fact that this image shows such detail on the ships rigging might be due to the fact that this aspect of the original is essentially in black and white and there was no confusion there. But from the rest of the above paragraph it is quite apparent that this image does not represent what was drawn in the original hand written journal. Even though this article is discussing a different portion of the image than the OP, I see little reason to believe that the questioned flag is being displayed any more accurately then the first.

We have been chasing an artists (mis)conception.

---Update--- After seeing this Information, @Aaron Brick was able to find another publication by Dr. Federova which actually showed the inked original by Lisianskii, and which seems to confirm my suspicions:

Pulled out my volume of Fedorova and surprise, it contains Lisiansky's india ink drawings of the two harbors. His tricolors have the middle band darkest as they should, while the mystery flag, almost too small to see, appears to have a simple cross...Aaron Brick

52
Why did Britain not purchase Alaska when Russia had it up for sale?
14
What is the flag in this 17th century painting?
31
Were there ethnic Russians in Alaska when the US purchased it 1867? Did they stay?
8
When did Europeans make their first well-attested visit to mainland Alaska?
1
Where was this flag flown?
12
What is this flag?
8
What flag are the men in these photos flying?